{Credit: This post was originally published on July 22, 2013 with the title "Starting a Wave to Heal Healthcare" on a personal web site -- republishing with permission}

Republishing with new title after feedback from a colleague suggesting that we'll "never heal healthcare", but we just might "revive medicine".

I’ve been talking a lot lately about a major passion of mine, that being “healing the healthcare system reviving medicine”. Whenever I get into a discussion with someone, I feel my own passion, I feel my energy rising. It’s a feeling of “life purpose”, and if you’ve ever had that feeling, you’ll know exactly what I mean. Almost surely the most common feedback I get during a discussion is along the lines of “love what you’re doing, love your message, keep it up, it will take time.” Lately I’ve started to smile back and simply say “why?”

Why will it take time? For months I have been telling people that we’re a lot closer than we think. I keep using the phrase “we’re at the 49% point”, so close to tipping the scale, so close to a solution. I want to share a couple of stories, then ask if you’re ready to help tip the scales.

I picked up a book the other day called “How to Change the World” and in it was the story of the Berlin Wall coming down in Germany in 1989, a pretty significant historical event. As the story is related, the politicians ended up taking the credit but do you know what really happened?

“On the twentieth anniversary of the Berlin Wall coming down, ‘world leaders’ flew in to Germany to deliver speeches to the listening masses.

It was striking that they came to take credit for this particular historical event, because world leaders had had very little to do with the Wall’s collapse. In reality, the barrier between East and West Berlin was pulled down because many ordinary Berliners did something very small. Having witnessed ‘people power’ effecting significant change in several neighbouring countries, and following massive protests elsewhere in East Germany, they merely turned up at the border to see what was going on. Soldiers at the control post, overwhelmed and likewise conscious of what had recently happened in neighbouring countries, opened the way for them to cross freely from one side of the city to the other. Soon after, the wall having ceased to be an effective barrier, it was pulled down. The fact that ‘world leaders’ took the credit does not diminish the achievement, but does suggest that, when changing the world, we can’t necessarily expect recognition for it. “ 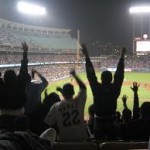 Or have you ever been to a baseball game where they do “the wave”, where people stand and raise their hands high into the air, section after section around the stadium, creating a wave effect? Think about how this started the very first time. One or two people had the idea to try this, so they probably chatted to a few other people around them, and then they tried to get everyone to do it. They surely failed miserably the first time, and probably the second and third times as well. But eventually enough people decided to join in, and finally people decided that they’d rather be part of the larger group that was participating than the smaller group that wasn’t. In the end almost everyone was participating, and a new tradition was born. Then people in other cities, at other sporting events, decided to see if they could duplicate the process, and it worked. Now you see the wave at sporting and other events all over the world.

How do these stories relate to healing healthcare reviving medicine and my assertion that we’re closer than we think? My simple premise behind healing healthcare reviving medicine s that when we start focusing on, finding and dealing with root causes, instead of simply masking symptoms, then the side effect will be that we will heal revive the health care system. We will be focused on the “care” instead of being focused on the “system”. When patients, as a whole, realize and insist that recognizing and dealing with stressors, diet and other root causes of physical symptoms as they occur, can resolve symptoms naturally in a very high percentage of cases, we will have changed the face of healthcare. When people realize that their own thoughts, choices, and actions have the biggest impact on their health, they will no longer give their power away to a system that focuses on masking symptoms. A grass roots effort of patients and others that are sick and tired of being sick and tired will be the impetus for activating ‘people power’ to change the way that we look at health and healing.

And here’s the rub. There are people all over the world that have the same or similar beliefs and they are doing their part to encourage and inspire people to take charge of their own health and happiness. They are starting their own wave in their own communities. They have already failed a few times in their attempts to get the masses on board for a full-fledged wave, but they’re not giving up. They’re so close. People are realizing that it’s okay to be part of the group that’s participating, and they’re almost ready to participate themselves. The next attempt just might create a full-fledged wave in their community. We are so close to tipping the scales that success is inevitable.

Are you ready to participate? Are you one of the early adopters, one of the ones that gets involved and shares stories like this to do your part to further a solution? Or are you ready to stand up with the crowd, now that the crowd is getting larger? Do you still think we’re a long ways away? Do you still think it will take a long time? Is it time for ‘people power’ to create a full-fledged wave? Do you think we’re at the tipping point?

Oh yeah, that story about the Berlin Wall coming down. How else does that relate? Once the masses decided that change was necessary, there really wasn’t anything that was going to stop it. And I think that’s the case here too. The wave has been started folks. It has been started in communities all over the world. And it’s not going to stop. And, in my humble opinion, it’s not going to take a whole lot more time to become full-fledged.

I just hope the politicians don’t decide to take credit for this one (smile).

KenJaques
Check out the Education and Videos posts
13.10.2020 (8 days ago)
Community
Recommend